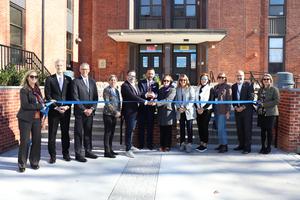 At the ceremony, Dr. Michael Hynes, Superintendent of Schools, thanked the Board of Education, his predecessor, Dr. Kathleen A. Mooney, as well as the District’s business and facilities office for their role in ensuring the project’s completion. Dr. Hynes then invited Dr. Mooney to speak about Edith Costello, noting that Edith Costello, who passed away in 2011, was a Paul D. Schreiber Class of 1950 graduate. Upon her death, she bequeathed just over $300,000 to be used at Schreiber High School in memory of her father, Leo Bernard Costello.  Leo Costello began his career at Schreiber High School in 1929 as a mathematics teacher.  He worked for the school district for thirty-six years.

The generous gift from Edith Costello was used in conjunction with bond renovation funds for a new facade at Schreiber High School, along with a plaque and memorial bench in memory of both Leo Bernard Costello and his very generous daughter, Edith.

Dr. Hynes invited the Board of Education Trustees to place items in a time capsule that were selected by Schreiber students to be placed in the ground of the Schreiber façade.  Some of the items placed in the time capsule were the Class of 2022 Yearbook, Portopoly (Port Washington’s version of Monopoly), hand sanitizer, a COVID-19 Antigen Test Kit, Apple Airpods, and a Schreiber Class of 2023 t-shirt. District administration and Board of Education trustees cut the ribbon on the new façade of Paul D. Schreiber High School. Board of Education trustees and Superintendent of Schools close the top of a time capsule to be placed in Schreiber High School’s recently renovated façade.